First Catalina Grand Fondo - What a blast I had -  after getting over sea sickness on the ferry in the morning.   I asked my friend Derek to go with me to Catalina at the last minute.   We left my house at 6:00 a.m. for Long Beach.  I had a partial smoothie for breakfast, just not easy eating so early in the morning.  I could only get a reservation for the 8:00 a.m. ferry and registration closed at 9:30 on the Island, so that would be too close.  I talked my way into getting on the earlier ferry and paid the guy $20.00 to park my bike by itself.

Once there I saw so many people I know and have not seen in so long.  I saw Jeanine, Liz, Lauren, Paul, Suzanne, Amy, Colette, Tracy - wow!  This event was very well supported and organized for the first event.  I was very impressed.   Derek was not registered and Suzanne let him use her Conservancy pass so he could play around the Island while I rode (thank you, Suzanne) --  We both wore our riding clothes from my garage, including bike shoes.  I was worried there would be no lockers or any place to put a change of clothes.
So I ended up in my bike gear from 6 a.m  to 10 p.m. -

The ride started with a fairly steep three-mile paved road with the first aid station at the top - I did not stop at the first aid station.  I managed to stay very focused on my breath and keep my goal in mind, which was five hours.  The climbing was brutal at times.  The single track was fun and pretty easy with nothing technical.  The first giant bison I saw was stunning.  People stopped to take photos, but I did not want to stop, then wondered if a bison would chase a mt biker?

I was happy to find myself passing other riders and feeling stronger than I have felt on any ride.  Jeanine and I caught up at an aid station and rode a bit together, but I am proud to say I dusted her! She told Liz that I killed her on this ride.  Quite an accomplishment since Jeanine taught me to ride!   I am sure I carried too much water and I won't be doing that again, but you just never know what the stops will have?

I stopped at the airport to use the bathroom and did not waste much time.  This ride was really a lot of fun, and at the next aid station I turned around and saw Derek. What the heck? Where did he come from?  He caught up to me!  Too funny! And from there the fun just went on and on.  Derek took a lot of photos, which I will attach (thanks, Derek) I guess the lady asked him if they ran out of signs for the bike...

At the last very steep climb I felt my heart start to hurt and scared me a bit (never felt that before) I walked my bike for a few minutes until the pain stopped.  Then I got back on and gave it all I had.  My legs were throbbing and I kept saying, "just ride through the pain" the pain is  temporary.  Will to work; Will to Win! --

At the last aid station ( I did not stop) and suddenly I found myself headed down the same three-mile black top we rode up - I felt this may be the wrong way. I turned around rode back a bit and shouted to a fella working at the aid station and I asked him which way, and he said and pointed UP!  --- that was at least another 7  miles and lots of climbing - that's where my heart started hurting....

The end was beautiful and after eating and bringing the ferry home, I felt like I had a wonderful day!  Thanks to my family and friends for their love and support!  I was happy I got to meet a new friend who calls herself Mighty Mouse and is quite a rider! 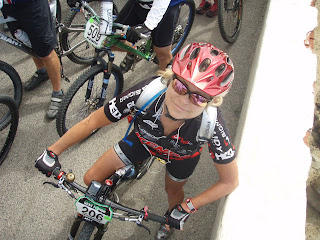 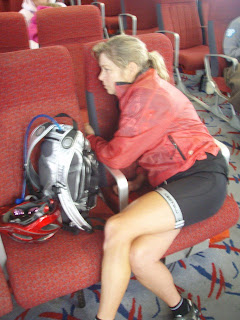 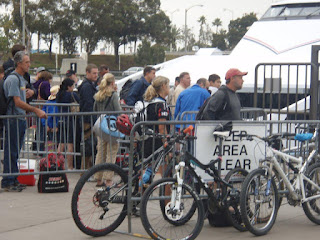 Waiting to see if we can catch the early boat 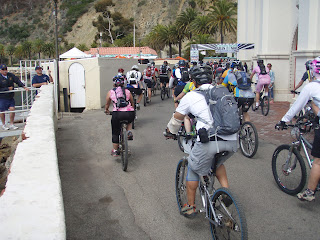 Suzanne and Paul are right behind me ready to roll! 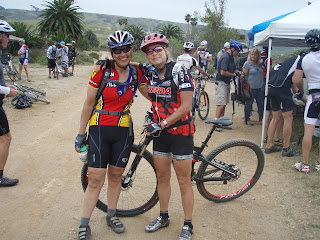 Jeanine and Cheryl are reunited! Nice

Posted by Cheryl Parrish at 2:45 PM